Crafting in a Sea of Change

I saw a Grumpy Cat meme the other day that summed up my current life situation: 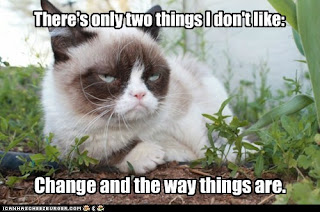 So.
In the midst of a work environment that had become toxic due to a terrible supervisor, I applied for a new job earlier this summer.  And I got it!  I'll still be a librarian, and still at a community college, but it is about an hour away from where we currently live.  Which means buying a new house...and selling our current house...and packing...and...and....and..... ARGH.

We're about 2 solid days of packing and cleaning away from being completely ready to list our place - I suppose we COULD list ASAP, but we don't have any pictures for the agent to create the listing.  If it sells at the price point the agent seems to think it will, we should be in the market for something quite nice (not super-fancy, but that's okay because that isn't my style anyway!).  It is just all this hurry-up-and-waiting that is making me crazy.

I walked into my basement craft cave, which I've been steadily stocking and creating in for almost 10 years, and wanted to cry.  SO.  MUCH.  STUFF!  Part of me says, "get rid of it, you'll NEVER finish it," while another part of me says "...but that is such an awesome Crafty Plan!!  Keep it!"  Sigh.  And it is so nicely organized, too.  I do have one big box of old patterns that I don't intend to keep, but I just don't know if I have the time or patience to list them all on a stash site.  They may be donated, I just can't decide!  But in my flustration (yes, that's what I intended to type), I had to sit down and Make.  Here's the result -

Another half doll.  This is GPA's "Alayne" pattern, first published the December 2012 issue of The Gift of Stitching (I think it is available as a stand-alone pattern now).  Again, I used a different doll, and used dark green floss where the pattern called for black - since my doll's bodice had a bit of green in it.  The variegated is Romy's Creations "Nougat Blue" as called for, and then DMC gold metallic.  The assembly for this one was bit different from the one I put together, and I think my doll's base might have been a bit more petite than the pattern was designed for.  No matter, I know where the flaws are but I don't think they are terribly visible!  And the pins I just threw together from my bead box. 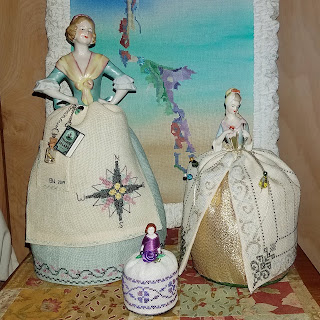 All my ladies, posing together with my in-progress Seaside Angel!
- September 05, 2019

Email ThisBlogThis!Share to TwitterShare to FacebookShare to Pinterest
Labels: finishing, half dolls, life

Your ladies are all so beautiful. Moving is stressful, remember to just breathe. You'll be moved and all set up in no time.

First, congratulations on your new job! Your new lady is gorgeous and your trio together are so beautiful. Good luck with the packing and getting your home ready to be listed and sold. Thinking of you during this time!

Love your half dolls. I have one waiting and waiting-she's a Lady in Waiting. Someday I'll get the courage to try her. I love the cross stitch clothing but I actually bought my lady ages ago along with some how to books from Helen Gibb to decorate them with ribbon embroidery. She'll be waiting for a while longer. Congrats on your new job and house.

Congrats on your new job and good luck with the sorting, packing and moving. Sometimes a new start can be just what you need, even if you don't know it! Keep thinking positively and try not to get too stressed. :)

Wow, how exciting for you! I know the packing up is hard, but it definitely gets you to clean up (and out) all your treasures. I normally donate the stash I know I'm not going to use, it is easier!
Your dolls look so lovely, I'm not seeing any flaws!

LOVE your dolls! And I just moved too, but from a house to an apartment and I'm downsizing a lot of my crafty stuff, too. Good luck with your move and the new job!!

Finishing is my coping mechanism

An internet friend of mine passed away very unexpectedly last week...so I've been crafting (and plotting new home decor, thanks to Wayfa...