Yes.  Yes it is.
Especially this past weekend...100+ degrees Fahrenheit (that makes it about 38 Celsius), humid, and absolutely gross.  Also, our living room AC unit - an old wall installation, not central air - died last week, and I just got on the contractor's schedule to have central air installed.  Of course, that didn't help at all over the weekend!  (It will be a bit pricey, but I think it will be worth it.  Even if we move, it will be a nice selling point.)

I DID stitch something - I fished a small kit from Celebrations of Needlework out of my stash.  Here is "Into the Deep Blue" by the Primitive Hare. 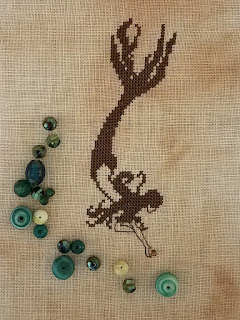 There were some buttons to attach as "bubbles," but I thought it made everything look a bit crowded, so I left them off.  Obviously the handful of beads is just scattered there for photographic purposes!  I did add the little bead in her hand - I liked the idea that she had a bit of treasure in her grasp.  I also already have a finishing idea, but just need to sit down and assemble it.

Back in early July I dropped off a piece with a new-to-me framer.  The price wasn't terrible, and I think he did at least as good a job as the chain craft stores...plus he seemed quite knowledgeable about what to do and what not to do with needlework.  The frame selection wasn't huge, so I don't know how often I'll use him, but it was a nice experience overall.  Here's the finished product - 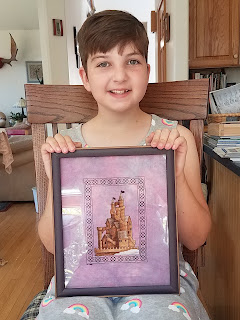 This is Dragon Fire Designs' "Once Upon a Time" pattern, from the April 2005 issue of Just Cross Stitch.  I'm amazed that I actually STITCHED it (and finished it!) in April of 2005, too!  LOL  The fabric is Sugar Maple Fabrics "Jewels" linen.  I remember thinking that when this was done, it looked like Hogwarts at sunset.  I let my daughter paw through the Bin of Unfinished Finishes to pick the piece we'd have framed, and I wasn't surprised when she settled on this one.  I also was not surprised when she zeroed in on the purple frame.  :)

One final find to share - I was at the thrift shop on my monthly poke-about, hunting for interesting frames and other doo-dads to re-purpose for finishing, when I found this. 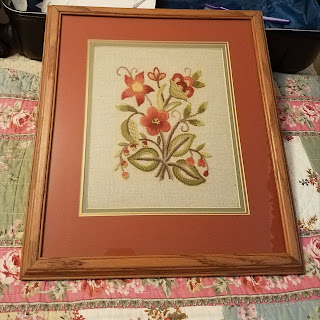 It is crewel, not cross stitch, but it is just pretty.  The framing is perfect, and I think it has a wonderful timeless feel to it - especially impressive after I turned it over and saw that someone had written on the back "Christmas - December 25 1978."  (I giggled that they felt the need to clarify that Christmas was on December 25.)  Unfortunately, the stitcher didn't sign it anywhere that is visible.  However, I'm still pretty sure it wasn't a mass-produced thing, in part because of the date info and also because there is a sticker from an old local frame shop on it.  Either way, I like it, and it now hangs in my guest bedroom!  I don't typically feel the need to rescue needlework - I know that tastes change.  Heck, I think I've donated some of the things I've stitched myself, simply because they didn't suit my decor and I didn't want them anymore.  I get a little annoyed when people think that everything that ends up in a resale shop was discarded as trash.  If you find it and love it, great!  Take it home, hang it on the wall, turn it into a pillow, make a scrap quilt of Found Needlework, whatever.  In the end it is all just Stuff, and we can't treasure everything forever...
at July 22, 2019

That is a pretty thrift store find! I always feel a pang of sadness when I see stitched pieces in thrift shops/garage sales (I do rescue those that really catch my eye.); however after reading your thoughts about it, I think I have to agree with you. It may take awhile though before I am ready to get rid of pieces that I have stitched which I no longer like.......I’ll work on it. 😊

Your mermaid is lovely.

What a fabulous crewel piece you found! Your mermaid is sweet and I would have left off the buttons and baubles as well. Your framed castle piece looks super. I really enjoyed (and liked) your thoughts about stitched pieces. Enjoy your week!

Love your framed piece, and the embroidery you picked up from your thrift store. How nice to not only recycle something but to know you're caring for a piece of work which was lovingly stitched. :)

Love your finished piece, and the framing is perfect. I have found some really pretty and all framed and everything cross stitched pieces in the thrift shops I frequent. Loving cross stitch myself, I know that no piece is stitched up without a little love put into it. I have a half dozen pieces or more hangin in my home that were done by other stitches and I love each one.
You have a fantastic week my friend.

Yuck for the heat, I'm ready to be done with summer! I'm glad you're getting central AC, I hope it gets installed soon.
Another mermaid to love! I like the beads next to her, but it does look a little busy.
A beautiful "Once Upon a Time", your daughter picked the perfect frame.
I find stitched pieces at thrift stores sometimes too. Some are worth saving but most I pass on.

What a great thrift store find. I hope it has gotten a little cooler for you. We had a similar temperature last week and I was actually glad to be in work as they have AC. Fingers crossed yours is fixed soon x